This isn’t the interview I watched Sunday afternoon…and haven’t yet been able to retrieve from BloombergTV. But, it ain’t bad. Most places, e.g., local TV, OTA TV channels, your friendly neighborhood local newspaper, don’t have the backbone to publish an interview as clinically critical by someone with the standing of Dr. Haseltine.

❝ The U.S. says there’s no legal basis for the government to be required to tell Microsoft customers when it intercepts their e-mail.

The software giant’s lawsuit alleging that customers have a constitutional right to know if the government has searched or seized their property should be thrown out, the government said in a court filing. The U.S. said federal law allows it to obtain electronic communications without a warrant or without disclosure of a specific warrant if it would endanger an individual or an investigation.

❝ Microsoft sued the Justice Department and Attorney General Loretta Lynch in April, escalating a feud with the U.S. over customer privacy and its ability to disclose what it’s asked to turn over to investigators…

The Justice Department’s reply Friday underscores the government’s willingness to fight back against tech companies it sees obstructing national security and [often bullshit] law enforcement investigations. Tensions remain high following a series of court confrontations between the FBI and Apple over whether the company could be compelled to help unlock iPhones in criminal probes…

❝ The industry’s push against government intrusion into their customers’ private information began at least two years ago, in the wake of Edward Snowden’s disclosures about covert data collection that put them all on the defensive.

Microsoft and Apple argue the very future of mobile and cloud computing is at stake if customers can’t trust that their data will remain private, while investigators seek digital tools to help them fight increasingly sophisticated criminals and terrorists savvy at using technology to communicate and hide their tracks…

Secrecy orders on government warrants for access to private e-mail accounts generally prohibit Microsoft from telling customers about the requests for lengthy or even unlimited periods, the company said when it sued. At the time, federal courts had issued almost 2,600 secrecy orders to Microsoft alone, and more than two-thirds had no fixed end date, cases the company can never tell customers about, even after an investigation is completed.

Not so incidentally, this isn’t especially a conservative vs liberal thing. There are a few of each in Establishment politics who will back up Americans’ right to privacy, right to know. Damned few.

The rest are silent. 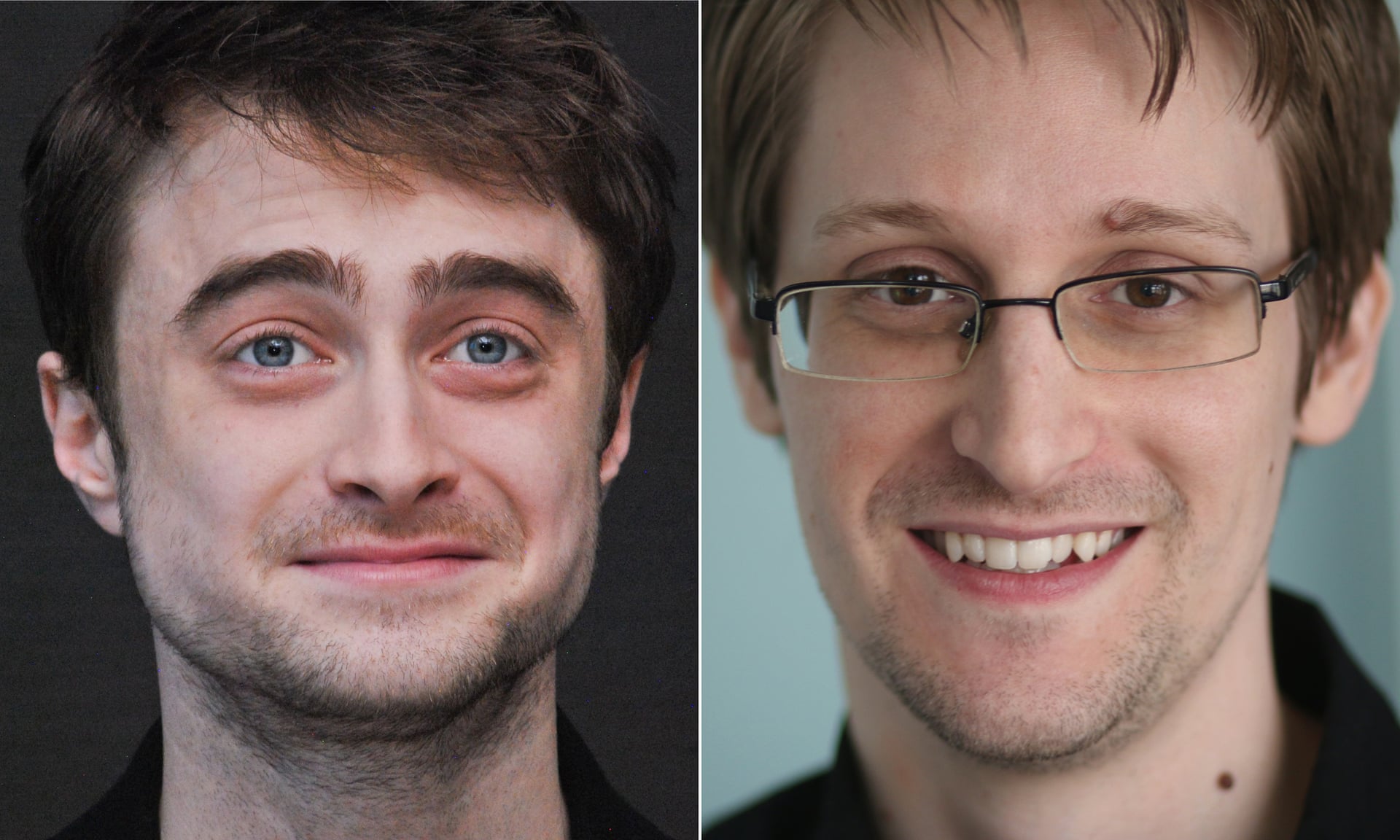 ❝ NSA whistleblower Edward Snowden and actor Daniel Radcliffe will appear together in a play starting on Saturday in New York City.

The show, Privacy, premiered in London in 2014 and has been refashioned for the American theatre. It was inspired by Snowden’s revelations that the US government was conducting mass surveillance on its citizens.

❝ Radcliffe and Snowden…rehearsed…though Radcliffe was in a Manhattan auditorium speaking to Snowden on video from Moscow, where he has lived since June 2013.

Snowden’s appearance in the play at the Public Theater will be confined to a screen as the US government has a warrant out for his arrest, because he leaked confidential NSA documents to journalists, including those at the Guardian.

Snowden and Radcliffe will appear together for about one minute, according to the Times, and only one of the men will be speaking live – the one actually on stage. The dialogue comes at a climactic moment and centers on statements Snowden has made about privacy.

Gotta piss off Uncle Sugar. Many of the creeps in and outside government officialdom who leaped to condemn Snowden are stuffed from eating their words. Even Obama has to admit much of this generation’s fight against government surveillance of American citizens flows from the critical revelations of Edward Snowden.

Not that our elected and appointed overlords have reduced or limited their commitment to snooping on us all. They’ve just been forced into more judicious choices of words describing their paranoia.

An abandoned uranium mine in the Navajo Nation

In the summer of 2010, a Navajo cattle rancher named Larry Gordy stumbled upon an abandoned uranium mine in the middle of his grazing land and figured he had better call in the feds. Engineers from the Environmental Protection Agency arrived a few months later, Geiger counters in hand, and found radioactivity levels that buried the needles on their equipment.

The abandoned mine here, about 60 miles east of the Grand Canyon, joins the list of hundreds of such sites identified across the 27,000 square miles of Navajo territory in Arizona, Utah and New Mexico that are the legacy of shoddy mining practices and federal neglect. From the 1940s through the 1980s, the mines supplied critical materials to the nation’s nuclear weapons program.

For years, unsuspecting Navajos inhaled radioactive dust and drank contaminated well water. Many of them became sick with cancer and other diseases…

The E.P.A. filed a report on the rancher’s find early last year and pledged to continue its environmental review. But there are still no warning signs or fencing around the secluded and decaying site…

“If this level of radioactivity were found in a middle-class suburb, the response would be immediate and aggressive,” said Doug Brugge, a public health professor at Tufts University medical school and an expert on uranium. “The site is remote, but there are obviously people spending time on it. Don’t they deserve some concern?”

Navajo advocates, scientists and politicians are asking the same question.

The discovery came in the midst of the largest federal effort to date to clean up uranium mines on the vast Indian reservation. A hearing in 2007 before the House Committee on Oversight and Government Reform led to a multiagency effort to assess and clean up hundreds of structures on the reservation through a five-year plan that ends this year.

Yet while some mines have been “surgically scraped” of contamination and are impressive showpieces for the E.P.A., others, like the Cameron site, are still contaminated. Officials at the E.P.A. and the Department of Energy attribute the delay to the complexity of prioritizing mine sites. Some say it is also about politics and money.

“The government can’t afford it; that’s a big reason why it hasn’t stepped in and done more,” said Bob Darr, a spokesman for the Department of Energy…

For some Navajos, the uranium contamination is all of a piece with their fraught relationship with the federal government.

“They’re making excuses, and they’ve always made excuses,” Ms. Lucy Knorr said. “The government should have had a law in place that told these mining companies: you clean up your mess when you leave.”

Even if the law was in place, the history of dealings between the US government and any of the Indian nations isn’t worthy of a well-contrived lie. The government cares as little as do the mining companies for the dangers left behind on Indian land.

Anyone who’s ever worked and lived in the medical community in the Navajo Nation knows of Navajo neuropathy. A generational illness that has distorted the lives of the children of uranium miners with genetically-distorted nervous systems. A result of parents who worked the mines.

Does anyone believe the radioactive waste, the radioactive sites remaining are less important to the health of the First Nations than, say, a couple extra aircraft carriers or a bombing wing dedicated to preserving the income of oil companies in the Middle East?

Our government is represented by at least as many hypocrites as the mining industry. In truth, I’m not certain I could tell them apart. They all look – and sound – the same to me.

An immigration judge in Florida has cleared the way for the deportation from the United States of Gen. Carlos Eugenio Vides Casanova, a former defense minister of El Salvador, finding that he assisted in acts of torture and murder committed by soldiers under his command during the civil war there, including several notorious killings of Americans.

The decision by Judge James Grim of immigration court in Orlando is the first time that federal immigration prosecutors have established that a top-ranking foreign military commander can be deported based on human rights violations under a law passed in 2004, in the aftermath of the Sept. 11 terrorist attacks, intended to bar human rights violators from coming to or living in the United States.

Judge Grim found that General Vides assisted in the killings of four American churchwomen on a rural road in El Salvador in 1980, a crime that caused shock there and in Washington and presaged the bloody violence that would engulf the Central American nation for the next decade. The immigration judge’s ruling is the first time General Vides has been held responsible for those deaths in a court of law.

Five soldiers from the Salvadoran National Guard were eventually convicted of the killings and served long prison sentences. General Vides was the commander of the National Guard at the time of the murders.

The effort by Department of Homeland Security officials to seek the deportation of General Vides, who was El Salvador’s defense minister from 1983 to 1989, is a turnabout in American foreign policy. He was a close ally of Washington throughout the war against leftist guerrillas in the 1980s, and was embraced as a reformer despite rampant rights violations by the armed forces under his command.

Judge Grim also determined that General Vides had assisted in the torture of two Salvadorans, Juan Romagoza and Daniel Alvarado, who testified against him in hearings last spring in the immigration court in Orlando.

“This is the first case where the Department of Homeland Security has taken this relatively new law and applied it to the highest military commander of their country to seek their removal,” said Carolyn Patty Blum, senior legal adviser for the Center for Justice and Accountability, a nonprofit legal group in San Francisco that represented several torture victims in the case. She called the decision “hugely significant” for future efforts to bring immigration cases for human rights abuses against the highest-level military commanders and government officials.

Republicans and Democrats alike have always justified the Murder, Incorporated style of American foreign policy as expedient during the Cold War. The ending of the Cold War has done nothing to change the style and substance of those policies. And, frankly, this case is surprising in its challenge to established strategy.

I have to wonder if the DOJ/DHS managed to offer a conscience separate from the White House or if Obama has cracked the door open to legitimate human rights concerns?

I presume you know that Congress as presently constituted will offer no such change. In fact, I imagine some of the most fascist-minded creeps will call for committee hearings on “America growing soft on terrorism” or something reflecting the corruption of what passes for conservatism in America.

They could recall Dick Cheney, secretary of War under Bush the Elder – who declared no involvement of the United States or Salvadoran political thugs in any of these murders.