Volkswagen CEO Hebert Diess has admitted that Tesla has a significant lead when it comes to software and its use in its self-driving program, according to leaked internal communications.

At first, it was touted more as a smartphone-like feature that enables your car to have a better user experience over time.

However, Tesla’s use of over-the-air software updates has evolved, and it is also now at the center of the automaker’s effort to achieve a fully self-driving system.

But what is of greater concern for VW’s CEO is Tesla’s use of software in its Autopilot program:

“What worries me the most is the capabilities in the assistance systems. 500,000 Teslas function as a neural network that continuously collects data and provides the customer a new driving experience every 14 days with improved properties. No other automobile manufacturer can do that today.”

No shit, Sherlock. At least, Hebert Diess recognizes the qualitative change wrought by Elon Musk. He’s brought motor vehicle production into the realm of digital management. He built-in a feedback loop providing information using conduits every competitor should be using to update their products. And using them to provide frequent, near-live data…if not live. Built into the vehicle operating system. 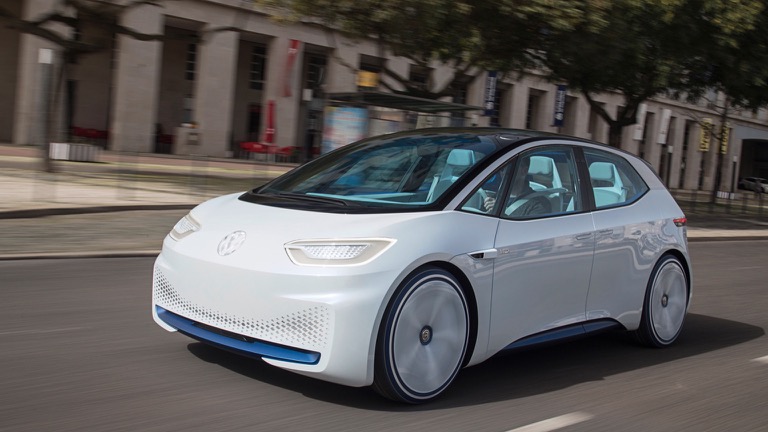 A dealership in Rochester, NY had a brand-new, German-built Volkswagen arrive for its pre-sales inspection, and with it came a little message. A message that wasn’t exactly grammatically correct, but the meaning behind it was unmistakable. The message? “Welcome Fuck of USA.”

I’m pretty sure the message-enterer wanted to say “Fuck off USA” instead of “Fuck of USA,” but I think we get the gist either way…I’m pretty sure this message will be changed before any potential customers get a chance to even look at the car.

Unless it’s not the only one. A major security flaw in more than 100 car models has been exposed in an academic paper that was suppressed by a major manufacturer for two years.

Flavio Garcia, a computer scientist at the University of Birmingham, and two colleagues from a Dutch university were unable to release the paper after Volkswagen won a case in the high court to ban its publication.

The research team discovered car manufacturers including Audi, Citroën, Fiat, Honda and Volvo, as well as Volkswagen, had models that were vulnerable to “keyless theft” because a device designed to prevent the vehicles from being stolen could be disabled easily.

After years of formal and informal negotiations, Volkswagen has agreed to the publication of the paper after accepting the authors’ proposal to remove one sentence from the original manuscript.

Garcia and his colleagues Roel Verdult and Bariş Ege, from Radboud University in Nijmegen, said they found several weaknesses in the Swiss-made immobiliser system, called Megamos Crypto. The device works by preventing the engine from starting when the corresponding transponder – embedded in the key – is not present.

But the researchers showed it was possible to listen to signals sent between the security system and key, making the vehicles vulnerable to “close-range wireless communication” attacks…

The RAC said electronic security systems have improved car security as vehicle theft has fallen 70% in 40 years. However, the overall decrease hides a rise in electronic hacking of vehicles, which featured in four out of 10 car thefts in London last year.

The point of any hack like this is lies with manufacturers revising their security. Sounds like VW was more interested in trying to keep the hack quiet instead of a fix.

Headlines rang out across the internet…that a robot killed someone in Germany. Beneath the sensationalist surface, there was a tragic truth: an industrial robot at a Volkswagen plant in Germany had indeed killed a 22-year-old worker who was setting it up. Coverage notwithstanding, this didn’t seem like the start of a machine-led apocalypse–I wanted a second opinion before heading to my backyard bunker. Ryan Calo is a law professor at the University of Washington, and he’s published academic works on our coming robot future, and the interaction between robots and cyberlaw.

Here are some of the questions…paired with his responses:

Popular Science: Yesterday Twitter was all abuzz about an industrial robot killing someone. You said at the time “this is relatively common.” What did you mean by that?

Ryan Calo: In the United States alone, about one person per year is killed by an industrial robot. The Department of Labor keeps a log of such events with titles like “Employee Is Killed When Crushed By Robot” (2006) or “Employee Was Killed By Industrial Robots” (2004).

You’ve written before about the potential for unique errors from autonomous machines. In future “robot kills man” stories, what characteristics should we look out for that make something go from “industrial accident” to “error with autonomy”?

Right. Industrial robots tend to do the same thing again and again, like grabbing and moving, and cannot generally tell what it is they are working with. That’s why factories establish “danger” or “kill” zones that people have to stay out of while the robot is operating…

Initial reports attribute the death to human error. At what point do you think having a human “in the loop” for an autonomous system constitutes a liability, instead of a safety feature?

In industrial robotics, that ship has long sailed. You couldn’t have a person in the loop and maintain anything like today’s productivity. Rather, you have to try to make sure — through protocols, warnings, etc. — that people stay out of the robot’s way…

RTFA for more of the same sensible discussion guaranteed never to make it into your local newspaper.

BTW, Professor Calo says he wouldn’t guarantee that Atherton’s questions weren’t being answered by a robot. 🙂

A Hong Kong movie theater asks its patrons to leave their cellphones ON when they enter the movie. Using that, Volkswagen made an eye-opening ad…

We first saw Volkswagen’s plug-in petrol-electric hybrid Cross Coupé concept at the Tokyo Motor Show. Now there’s a new Cross Coupé concept to be shown at the Geneva Motor Show this week that use a turbodiesel direct injection engine (TDI) and two electric motors to achieve 1.8 liters per 100 km (around 125 usmpg) with CO2 emissions of just 46 g/km.

The Cross Coupé is proof that achieving 125 mpg is not just the realm of asthmatic shopping trolleys as the 225 kW Cross Coupe has a top speed of 137 mph and a curb weight of 4,096 lb.

The article is from the UK so it notes over 150 mpg. Those are imperial gallons and I’ve converted it to US gallons.

Unfortunately, everyone who builds diesel anything still suffers from the few years that GM offered cars with the worst diesel engines ever made in the history of motor vehicles. They leaked, smoked and drove like crap. German manufacturers have slowly overcome the lousy history – and still only bring in a fraction of the diesel power they’re capable of, that demand requests.

Yes, they sell out everything they offer – but, like everyone else – they don’t have a boatload of confidence in American consumers figuring out the difference.

Volkswagen’s electric city car, the Nils concept car, is still my favorite. Click on the photo for many more – costing much, much more. If any of these ever made it to production.