At least seven states have postponed their presidential primaries in the face of the coronavirus pandemic.

That has raised concerns about the other states that have state elections and federal primary elections planned for later this summer – and of course the general election in November.

The main concern, in terms of the pandemic, is that elections cause people to congregate at the polling places on Election Day. If it’s not safe to be within six feet of someone outside your immediate family, it’s seems ill-advised to line up with all your neighbors to check in, or to visit a small voting booth someone else was just in, or to pick up the same pen or touch the same touchscreen they used just moments ago…

To hold elections without delays, the obvious solution is to let people vote elsewhere, at other times.

RTFA. Useful, easy to accomplish suggestions. The difficulty will be the fumble-fingers Congress.

Many of the pimps for Trump – no surprise – simply call for the presidential election to be canceled. Get round to it sometime that seems easier on the Fake President. 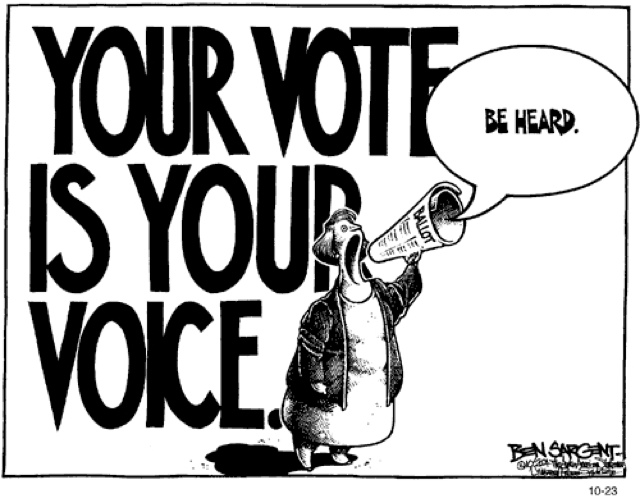 ❝ Even if you don’t believe lizard people and the Illuminati secretly run our planet, the world really is filled with unseen influences. The languid music in the grocery store makes us walk slower and spend more money, and product placements in TV and movies leave us inexplicably craving things like Coca-Cola and Spicy Sweet Chili Doritos…

With the presidential election around the corner, Science asked experts in computer science, business, and law to weigh in on how companies like Google and Facebook, which function as the primary gateway to online information for millions of voters, could influence the outcome…

❝ Last summer, Science reported on something called the search engine manipulation effect. Because companies like Google have gotten so good at providing the best links first, the higher an item appears on a list of search results, the more users trust it. That’s OK if you’re looking for the best place to buy a set of kitchen utensils or back-to-school supplies, but the study’s lead author, Robert Epstein…showed that by simply putting links for one candidate above another in a rigged search, he and his co-author could influence how undecided voters choose a candidate…

The effect was largely invisible to the study participants; most had no idea they were seeing biased results. But even if they did, they thought the search engine was merely doing its job and ranking a better candidate higher than his or her opponent…

❝ By Epstein’s calculations, biased Google results could shift the vote in November by up to 2%, or about 2.6 million votes. This may not seem huge, but many presidential elections in the United States have been decided by margins narrower than that…

Is there any evidence to suggest that internet gatekeepers are taking advantage of this power?

No. But this question gets at the real crux of the problem because, for now anyway, there’s really no way to find out. Generally, regulators can’t audit Google or Facebook or any other tech giant to find out how their proprietary algorithms determine the content we see on a screen. Intellectual property laws allow these companies to keep private the specifics of search and newsfeed algorithms, making it extremely difficult to parse out any bias in content that users see.

RTFA if you want even more details to worry about. Inevitable questions about security vs privacy, federal government oversight vs individual freedom to act stupid arise. Think about it.

A University of Colorado Cancer Center study published in the journal Nicotine & Tobacco Research shows a new dimension to the marginalization of smokers: people who smoke are less likely to vote than their non-smoking peers.

“On one hand, the result is intuitive. We know from previous research that smokers are an increasingly marginalized population, involved in fewer organizations and activities and with less interpersonal trust than nonsmokers. But what our research suggests is that this marginalization may also extend beyond the interpersonal level to attitudes toward political systems and institutions,” says Karen Albright, PhD…Colorado School of Public Health…

The data comes from the Colorado Tobacco Attitudes and Behaviors Study (C-TABS), a questionnaire administered by Arnold Levinson, PhD, investigator at the CU Cancer Center, director of the University Health Smoking Cessation Program, and the paper’s senior author.

Through random digit dialing, the study reached 11,626 people who completed a telephone survey querying a range of demographic, social, and behavioral factors. Questions included smoking behaviors and whether the respondent had voted in a recent election. Overall, 17 percent of respondents were smokers. Holding all other variables constant (included variables of socioeconomic status that were strongly associated with smoking), daily smokers were 60 percent less likely to vote than nonsmokers.

The study is the first to link a health-risk behavior with electoral participation, building on the work of a previous Swedish study that found an association between smoking and political mistrust. Voting is a direct behavioral measure of civic and political engagement that at least partly reflects trust in formal political institutions.

Albright points out that, like many studies that use statistics to describe the behaviors of a population, the current study creates as many questions as it answers, most notably why smokers are less likely to vote. One possibility is that smokers may view political institutions as oppressors, given widespread enactment of tobacco taxes and clean indoor air laws. Somewhat similarly, the stigma associated with smoking may create social withdrawal or feelings of depression or fatalism among smokers, which could decrease voting.

Or…given the key social question asked most often at this blog, “are they ignorant or stupid?” – the pretty generalized understanding of the dangers of smoking seems to indicate these people are stupid. 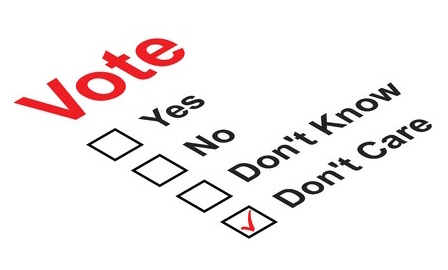 What if there was an election and no one showed up to vote – not even the candidates themselves?…That’s precisely what happened in the recent Hagerman, New Mexico, school board election…Three candidates ran unopposed: None received a single vote, not even their own.

It was a lack of opposition and not a lack of interest in education that kept the town’s 1,034 eligible voters away from the polls, said Superintendent Ricky Williams, who supervises the three-school district of fewer than 500 students.

The fact that the candidates were unopposed – and that the election was held in Roswell 26 miles away – may have had something to do with it, he said. Polling stations were not open in the southeast New Mexico community, a decision made by Chaves County…

None of the candidates for three open seats on the five-member school board was an incumbent, so each candidate needed at least one vote to be elected…

Cindy Fuller, Bureau of Elections chief for Chaves County, said that with no contested positions, no write-in candidates and no questions or bonds on the ballot, state statute permits the clerk’s office to handle the election. There were voting convenience stations in Roswell, she said, but not Hagerman.

That turned out to be not convenient enough…

BTW, in the population center of the state, Albuquerque, less than 2.6 percent of voters showed up to vote for Albuquerque Public Schools and Central New Mexico Community College board elections. Of 297,291 eligible voters, only 7,668 cast ballots.

An Arizona woman, in despair at the re-election of Democratic President Barack Obama, ran down her husband with the family car in suburban Phoenix on Saturday because he failed to vote in the election…

Holly Solomon, 28, was arrested after running over husband Daniel Solomon following a wild chase that left him pinned underneath the vehicle.

Daniel Solomon, 36, was in critical condition at a local hospital, but is expected to survive, Gilbert police spokesman Sergeant Jesse Sanger said.

Police said Daniel Solomon told them his wife became angry over his “lack of voter participation” in last Tuesday’s presidential election and believed her family would face hardship as a result of Obama winning another term.

Witnesses reported the argument broke out on Saturday morning in a parking lot and escalated. Mrs Solomon then chased her husband around the lot with the car, yelling at him as he tried to hide behind a light pole, police said. He was struck after attempting to flee to a nearby street.

The U.S. prides itself as the beacon of democracy, but it’s very likely no U.S. president has ever been elected by a majority of American adults.

It’s our own fault — because voter participation rates are running below 60 percent, a candidate would have to win 85 percent or more of the vote to be elected by a majority…Compulsory voting, as exists in Australia and more than two dozen other countries, would fix that problem. As William Galston of the Brookings Institution argues, “Jury duty is mandatory; why not voting?”

For economists, the puzzle is not why voting participation rates are so low in voluntary systems, but why they’re so high. The so-called paradox of voting…occurs because the probability that any individual voter can alter the outcome of an election is effectively zero. So if voting imposes any cost, in terms of time or hassle, a perfectly rational person would conclude it’s not worth doing. The problem is that if each person were to reach such a rational conclusion no one would vote, and the system would collapse.

Mandatory voting solves that collective action problem by requiring people to vote and punishing nonvoters with a fine. In Australia, the penalty starts small and rises significantly for those who repeatedly fail to vote.

Beyond simply raising participation, compulsory voting could alter the role of money in elections. Turn-out-the-vote efforts, often bankrolled by big-money groups, would become largely irrelevant. Negative advertising could be less effective, because a central aim of such ads is to discourage participation in the opponent’s camp…Surely sounds like the Republican/Kool Aid Party.

Politicians don’t seem to believe the dominant political science view suggesting mandatory voting would have little effect on elections, perhaps with good reason given some research suggesting a larger impact. Moving to compulsory voting would probably require a constitutional change and almost certainly would require the participation of both parties. It could be instituted only when it would not be of obvious benefit to one political party over another.

This brings us to the paradox of compulsory voting: It’s a sensible idea that could be enacted only when it would have almost no effect. In that case, some might wonder, why do it? The answer is that increased participation would make our democracy work better, in the sense of being more reflective of the population at large. And it could allow the first president in history to be elected by a majority of American adults.

The toughest part of making such a qualitative change isn’t getting it introduced. As dead in the water as are most Congressional hacks, the sense of parallel between jury duty as a civic responsibility isn’t beyond the average Democrat. The problem will be the two levels of resistance among Republicans. Those few who legitimately believe it’s somehow violating individual liberty – and the overwhelming number who fear greater participation in any election probably would benefit Democrats.

From their own narrow, class-based perspective they’re probably right. All the more reason to make popular participation mandatory.