❝ With no computer or internet at home, Raegan Byrd’s homework assignments present a nightly challenge: How much can she get done using just her smartphone?

On the tiny screen, she switches between web pages for research projects, losing track of tabs whenever friends send messages. She uses her thumbs to tap out school papers, but when glitches keep her from submitting assignments electronically, she writes them out by hand…

❝ She is among nearly 3 million students around the country who face struggles keeping up with their studies because they must make do without home internet. In classrooms, access to laptops and the internet is nearly universal. But at home, the cost of internet service and gaps in its availability create obstacles in urban areas and rural communities alike.

Please, don’t waste time patting yourself on the back because you did homework BITD by hand before the Internet existed, blah, blah, blah. I’m older than probably 99% of folks on the Web nowadays and I wouldn’t go back to what was available when I was a high school senior in 1954/55 on a bet.

I’ve been online for 36 years and I wouldn’t go back to all the previous means for information search and retrieval for any reason. Books are great, TV and film helps, any number of sources perform well – when available. And with decent broadband access, available means more information is ready to access than you can dream of. For a school age child, nowadays, the Web is the best choice there is.

Then you have to deal with all the reasons it isn’t available for lots of folks, lots of schoolchildren. Starting with cost. 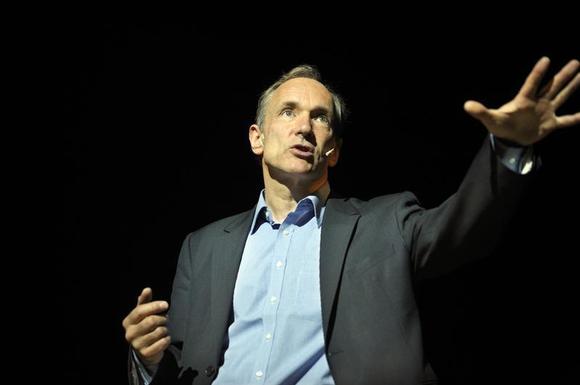 Tim Berners-Lee, the British scientist who effectively invented the web with a proposal 25 years ago, has used the anniversary to establish a campaign called Web We Want. He wants people to sign up to this campaign and help draft a global “Internet Users’ Bill of Rights” to cover the next 25 years.

Berners-Lee kicked off the Web We Want drive with a series of interviews, in which he argued that the web is under threat from both corporations and governments, leaving its openness and neutrality in doubt.

“Unless we have an open, neutral internet we can rely on without worrying about what’s happening at the back door, we can’t have open government, good democracy, good healthcare, connected communities and diversity of culture,” he told the Guardian. “It’s not naive to think we can have that, but it is naive to think we can just sit back and get it.”

On the government side, Berners-Lee is worried about surveillance in the wake of Edward Snowden’s NSA and GCHQ revelations, as well as the fragmentation this may cause. On the corporate side, he is concerned about the abuse of net neutrality and copyright law (which he described as “terrible”), as well as the prevalence of proprietary ecosystems such as Facebook.

The principles behind Web We Want, which is coordinated by the World Wide Web Foundation, are as follows:

Freedom of expression online and offline

Neutral networks that don’t discriminate against content or users

I’ve been online since 1983. Even in early Internet days folks understood the risk of abuse by Government probably more so than by corporate scumbags. I recall one BBS I belonged to that had to become a fundraising center because one of the members was arrested and thrown into jail in the great state of Louisiana because of his gender identity.

Like most experienced geeks, I haven’t had a problem with most corporate access to my data because generally that access was granted by my own decision. Though, again, there always are those who see a chance to make a disreputable buck by selling illegally-acquired info.

But, courtesy of George W Bush and Barack Obama, we’re back to government snooping big time. The best of tech companies are working their coneheads off trying to build more secure systems, better encryption, means and methods we haven’t even heard of – yet – to protect us from Big Brother. Tim Berners-Lee’s proposal for a Web Bill of Rights makes a lot of sense, too. And I heartily endorse it.

To old fogeys like me, it seems like only yesterday that the coolest way to go online was to dial up the AP wire service bulletin board on a 300-baud modem, but it was actually two decades ago that the web as we know it burst onto our world. On Tuesday, it was 20 years ago that the World Wide Web went public, when CERN made the technology behind it available on a royalty-free basis. To mark the occasion, the organization announced that it is recreating the world’s very first website for posterity.

It wasn’t much to look at – just text and hyperlinks – and the subject was the World Wide Web itself, so it wasn’t exactly like finding a treasure trove of LOLcats or a Kirk vs Picard flame war, but the first website did mark a significant jump forward. Flash animation, Java plugins, apps, streaming video and even images and audio were still in the future, but that first site turned the internet from the domain of computer scientists and hobbyists into the information super system that modern society now depends upon.

Invented in 1989 at CERN by Tim Berners-Lee, the web was first designed as a way for physicists around the world to share information. It was by no means the first or only way to share information online, but by making the software to run a web server available for free and then throwing in a basic browser and code library, CERN was able to do for the internet what Henry Ford did for the motor car. It went from the plaything for the few to being the workhorse for the masses…

Unfortunately, like many historic firsts, there wasn’t much incentive to preserve the first website that Berners-Lee hosted on a NeXT computer. After a few years, the site was retired and the URL merely redirected to another site. The NeXT machine that acted as the original web server was still at CERN, but it was a museum piece.

Now, to celebrate 20 years of people typing “WWW,” CERN is bringing the first website back to life. The NeXt machine has been refurbished and the URL has been reactivated as CERN starts a project to collect and preserve the information assets that made up that first foray into our modern digital world.

One of those “old fogies” – I remember getting “onto” this new WWW-thingie as soon as it started up. I’d been online since 1983 – first as a necessity. I wouldn’t receive my sales commissions unless orders were sent online directly to the company’s one online server the other side of the country.

Then, to BBS and communications online. Traveling my sales territory with my Tandy Model 100 laptop computer and 300 baud modem. Which I still have somewhere in the closet next to my study. How far we have come in such a comparatively short period. How welcome and useful it all is, now.

Twenty years ago, Tim Berners-Lee announces his modest project. The World Wide Web isn’t “dead media” yet, but it sure obliterated a lot of the once-thriving Internet features that preceded it.

> Is anyone reading this newsgroup aware of research or development efforts
in
> the
> following areas:
> 1. Hypertext links enabling retrieval from multiple heterogeneous sources
of
> information?

The WorldWideWeb (WWW) project aims to allow links to be made to any
information anywhere. The address format includes an access method
(=namespace), and for most name spaces a hostname and some sort of path.
We have a prototype hypertext editor for the NeXT, and a browser for line mode
terminals which runs on almost anything. These can access files either locally,
NFS mounted, or via anonymous FTP.

They can also go out using a simple protocol
(HTTP) to a server which interprets some other data and returns equivalent
hypertext files. For example, we have a server running on our mainframe
(http://cernvm.cern.ch/FIND in WWW syntax) which makes all the CERN computer
center documentation available. The HTTP protocol allows for a keyword search
on an index, which generates a list of matching documents as annother virtual
hypertext document.

If you’re interested in using the code, mail me. It’s very prototype, but
available by anonymous FTP from info.cern.ch. It’s copyright CERN but free
distribution and use is not normally a problem.

It continues for a spell. Click the link to read the complete transcript. It isn’t cluttered up with too many boring parenthetical comments from 2011.

I recall discussions of this “publication” on the Internet. I had been online – in New England, then the Southwest when this hit the ether – for eight-and-a-half years. I wondered if it would catch on. 🙂