Neanderthals are often portrayed as Homo sapiens’s crude, primitive relatives, incapable of sophisticated culture, but new archaeological findings are subverting that narrative. In the latest example of Neanderthal art, archaeologists found a 51,000 year old bone carving in the mountain caves of Germany.

Archaeologists were excavating materials from the prehistoric entrance to Einhornhöhle, or the “Unicorn Cave,” in the Harz Mountains in Germany when they found the 2.2 inch-long bone. Scientists identified it as a phalanx, or toe bone, of a giant deer, and radiocarbon dating suggested that it is at least 51,000 years old.

But what was most remarkable about this bone was how it had been modified: Etched into its surface were a series of lines creating a chevron-like pattern. The cuts were clean and uniform, and also served no obvious purpose, which led scientists to conclude that they must have been both intentional and symbolic…

It’s clear that whoever made the bone carving took time and care. Microscopic analysis of the phalanx shows that the lines are etched pretty deeply, which suggests that the bone was boiled before carving to soften the surface. Giant deer were also not very common in the area at the time. All this evidence points to the idea that the phalanx art had some weighty significance, and was thoughtfully planned and executed.

I’ve mentioned this before…but, it’s relevant to this post. I have an abiding interest in my Neanderthal kin. About 3% of my DNA goes back the Neanderthal epoch…more than usual among folks with any trace at all. I kind of dig it. I’m not foolish enough to lay any attribution or characteristic to that portion. I just find the link appealing. Roots are roots.

Lord Howard de Walden, landlord to many eminent figures in the medical profession and last of the great British racehorse owner-breeders, has died, aged 86.

He inherited 120 acres of London’s west end and bred and owned the 1985 Derby winner, Slip Anchor. But the story he loved to dine out on was when, as a young Cambridge student fresh out of Eton, he was driving a new car in Munich when a man walked out in front of him and was knocked down. “He was only shaken up,” recalled de Walden. “But had I killed him, it would have changed the history of the world.” The man was Adolf Hitler.

This is the lead-in to an article published Sun 11 Jul 1999…just after Lord Howard’s death. And think what this autobiographical note means to the world unchanged.

If the event had changed the course of the world, we wouldn’t know that it had. The event might not be worth a mention in the life of a British aristocrat.

A huge wooden penis statue that went missing from a mountainside in Germany has been re-erected…German police had launched a probe into the disappearance of the statue that is located on the Grünten mountain near the German/Austrian border.

However, it seems the statue, which is two metres tall, had been knocked over by a stampede of cows, leaving only a small stump and chips of wood.

After hearing what had happened, several people climbed to the top of the mountain to put it back in its rightful position.

❝ EU regulators based a decision to relicense the controversial weedkiller glyphosate on an assessment plagiarised from industry reports, according to a report for the European parliament.

A crossparty group of MEPs commissioned an investigation into claims, revealed by the Guardian, that Germany’s Federal Institute for Risk Assessment…copy-and-pasted tracts from Monsanto studies…

❝ The authors said they found “clear evidence of BfR’s deliberate pretence of an independent assessment, whereas in reality the authority was only echoing the industry applicants’ assessment.”

Really pisses me off. I’ve read and referenced that report in the past – and accepted it as legitimate. Just another example of the lengths corporate profiteers will go in corrupt practices to make a buck. 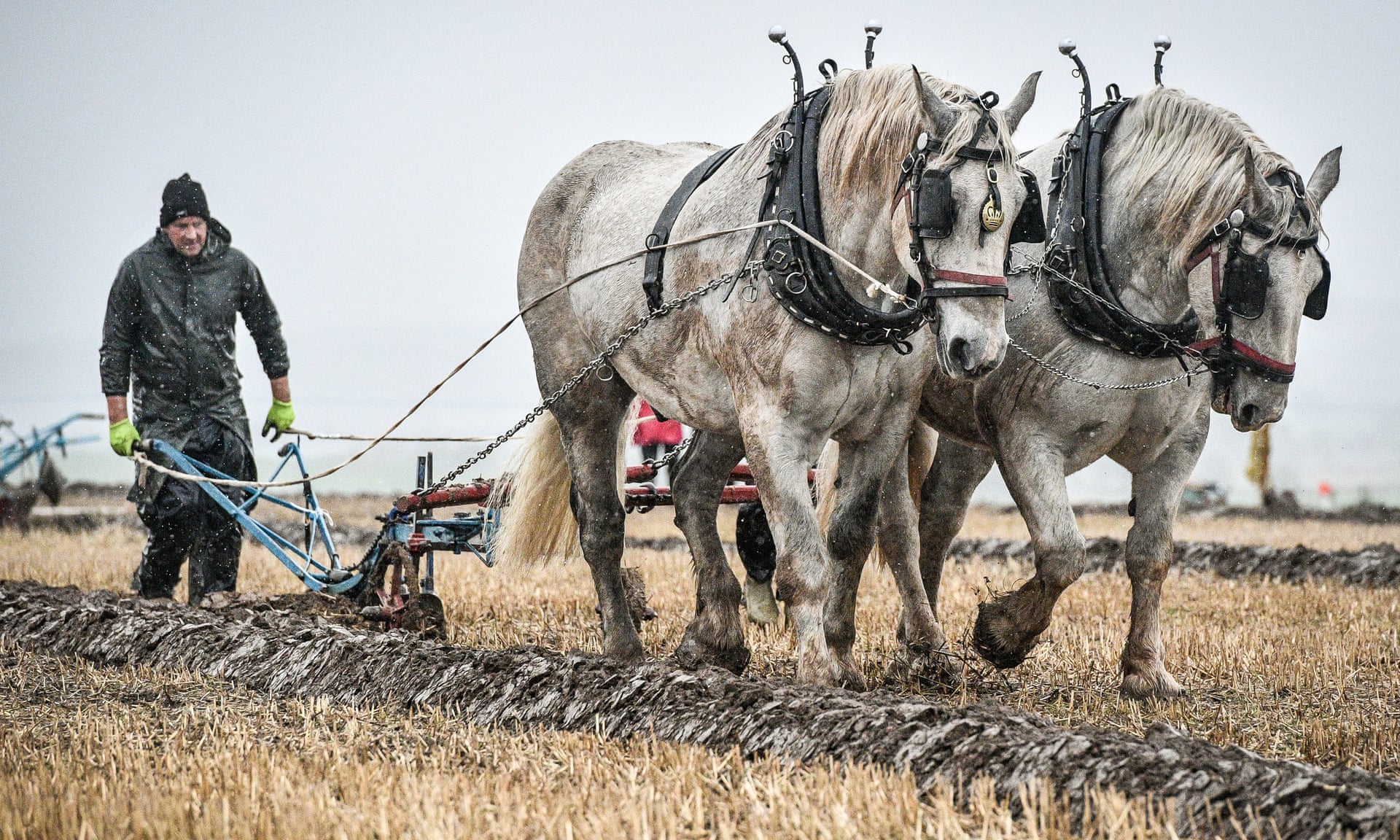 Click to enlarge — Vintage ploughing competition at a modern venue

Truly interesting article on heartbreak and heroics at the World Ploughing Championships.

The photo up top has little to do with the article – but, it’s a terrific photo.

❝ Hirving Lozano scoring the lone goal in Mexico’s 1-0 victory over reigning World Cup champion Germany appears to have led to an artificial earthquake in Mexico City on Sunday.

Two monitoring stations in Mexico City picked up the temblor the same time Lozano scored, 35 minutes into the match. Seismologists in Chile also said that their instruments detected an artificial temblor at the same time.

Felt that way to the German team, as well. No doubt. And it was lovely team play right down the pitch.

❝ Germany’s resolute Chancellor Angela Merkel is not usually one to admit she’s been wrong. But this autumn, when it comes to her faith in austerity economics in Europe, Merkel, together with her then-Finance Minister Wolfgang Schaüble, did as much — in deed, if not in word…

Mario Centeno constitutes a shift in course. Until now, he has represented a Southern European country, Portugal, that received a 78 billion euro ($92 billion) bailout from its fellow European Union member states amid the euro crisis. But even more remarkable, Centeno was part of a leftist government with the backing of a communist party, which subsequently bucked the marching orders of its northern creditors and the troika composed of the European Central Bank, European Commission, and International Monetary Fund.

Centeno, like the Portuguese government he served, already symbolizes the possibility that a new, less German, ideological era of economic governance is in the offing in Europe. Lisbon is the first Southern European government to climb out of the swamp of indebtedness and stagnation. Its economy is undergoing its fastest expansion in over a decade, and more growth is expected next year, which will shrink the country’s budget deficit to 1 percent of GDP — the slightest in 40 years. Unemployment this year fell to 9.2 percent, down from 17.5 percent in 2013, and exports are picking up…

Unlike the land of Chumps and a Fake President, a surprising number of EU Nations are willing to experiment with genuine reform. Sometimes conservative, often progressive, almost always advised by well-educated and market-proven economists instead of the obedient pap rolled out by our two-party beer commercials. 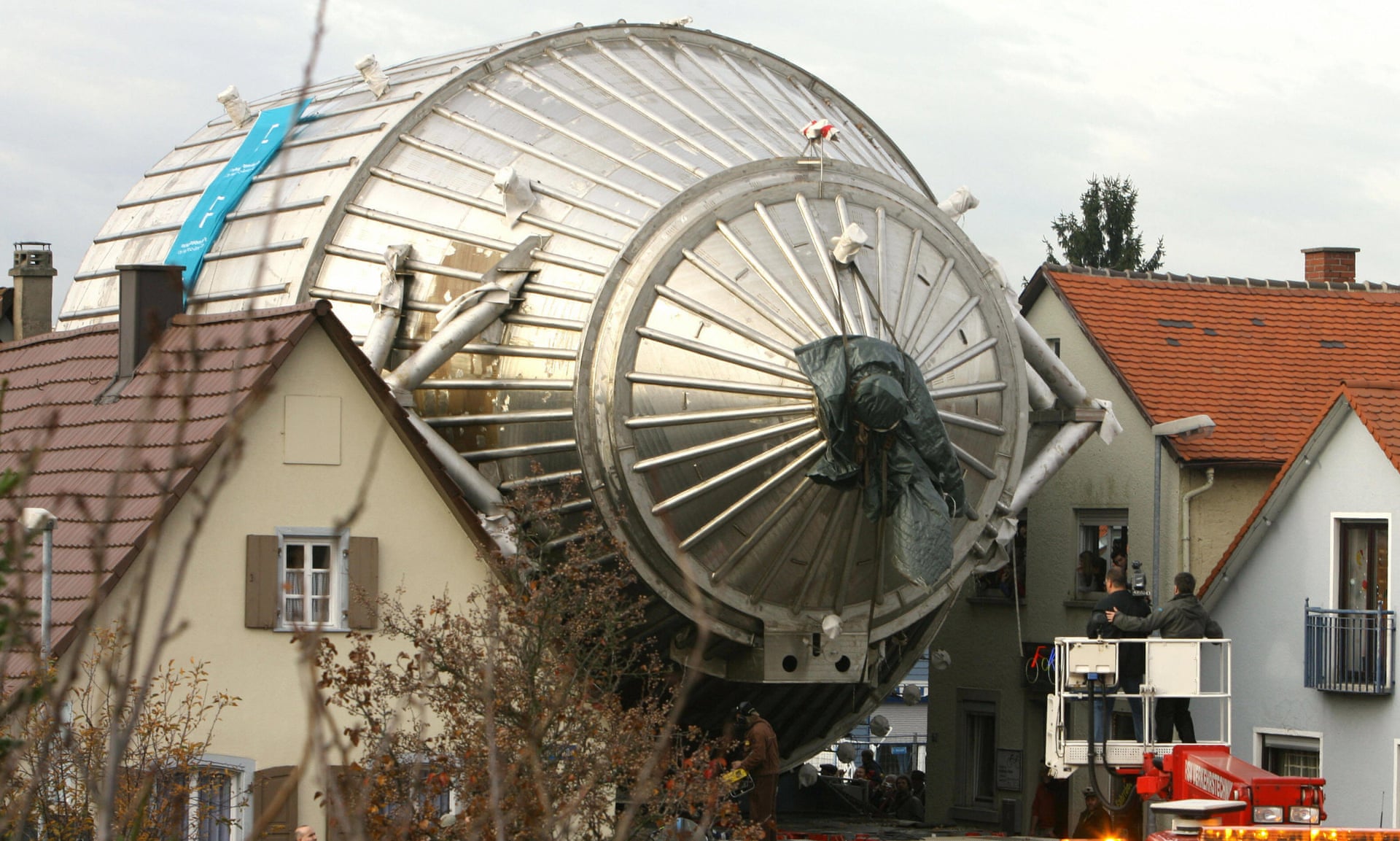 ❝ On the outskirts of Karlsruhe, in south-west Germany, engineers have buried a giant, stainless steel device, bigger than a blue whale, inside the town’s institute of technology. The machine looks for all the world like a grounded zeppelin or a buried blimp.

In fact, the apparatus is one of the world’s biggest vacuum chambers. Air pressure inside it is lower than that on the surface of the moon and it has been installed to help solve a single, intricate problem: finding the mass of the universe’s most insignificant entity, the neutrino.

❝ “We have pushed technology to the limit in building Katrin,” says the project’s leader, Guido Drexlin. “Apart from creating a near perfect vacuum inside its huge chamber, we also have to keep the temperature of the tritium, which is the machine’s source of neutrinos, inside the device to a constant 30C above absolute zero. We have also had to take incredible care about the magnetic fields inside the machines. Essentially, we have had to demagnetise the whole building…”

❝ It has taken more than a decade of planning and construction to put Katrin together. Its price tag, just over €60m, has been met by the German taxpayer via the country’s state-funded Helmholtz Association, with a further €6m chipped in by US, Russian, Czech and Spanish scientists who will have a minor involvement with the project.

Final trials are now being completed and full operations are set to begin in June, though it will take a further five years of gathering data before scientists can expect to have enough information to make an accurate assessment of the neutrino’s mass.

“Even then, we may have to go to a second phase of operations to get our answer,” says Drexlin. “We are moving into unknown territory here.”

OK. Anyone here who believes Trump’s bullshit about government, nature or society may as well leave, now.

Here’s the link, again, to the article – for folks who appreciate government sponsorship of basic scientific research that brings more knowledge to our species.