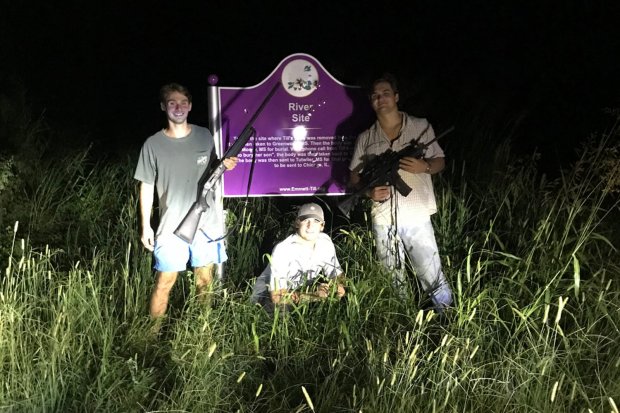 ❝ First off, if you haven’t learned about – or are old enough that you should remember and don’t – here’s a link to the tale of Emmett Till. Tortured and murdered by racists in Mississippi in 1955.

❝ Second, here’s an article in ProPublica – the first place I saw mention, today, of an incident involving Ole Miss students posing with their guns in front of a bullet-riddled roadside memorial pointing out the site where Till’s body was discovered in 1955. Not a helluva lot changes in Mississippi, I guess.

This won’t get as much coverage in mainstream media as, say, our fake president’s just-as-evil twin being elected Prime Minister of the barely-United Kingdom of England, etc.by his obedient followers.

All Power to the people!

Some feelings never mellow with age.

❝ “This is indicative of how they are now evaluating and handling complaints,” said Kaitlin Banner, a senior attorney with the Advancement Project.

A ProPublica analysis of data on more than 40,000 civil rights cases, obtained through multiple public records requests, bears out Banner’s point. We found that, under Secretary of Education Betsy DeVos, the department has scuttled more than 1,200 civil rights investigations that were begun under the Obama administration and lasted at least six months. These cases, which investigated complaints of civil rights violations ranging from discriminatory discipline to sexual violence in school districts and colleges around the country, were closed without any findings of wrongdoing or corrective action, often due to insufficient evidence…and other phony excuses.

This is what anyone who cares about maintaining and improving public education feared. Trump, DeVos, the whole wrecking crew on the racist, class war Right have looked forward to the opportunity handed over by populist chumps in the 2016 election. It doesn’t matter whether your excuse is “stupid” or ignorance or “golly, I never thought anything like this could happen in America” – it is happening and it was predictable. If you voted for Trump? You own it!

❝ Once the most powerful sheriff in the United States, Lee Baca is now headed to prison.

A jury convicted the former Los Angeles County sheriff Wednesday on conspiracy charges stemming from his role in a cover-up of extensive civil rights abuses inside the county’s vast jail system.

❝ The scope of Baca’s actual conviction is much narrower than the departmental scandal that eventually chased him out of office in 2014, as dozens of his officers faced criminal charges.

❝ Baca’s own convictions tie back to one specific incident within a much longer saga of abusive and corrupt practices in the county jail system. Human rights lawyers had documented allegations of brutality and corruption inside Baca’s jails for years before federal investigators got involved. When Baca’s team discovered the investigators had an inmate informant, they hid the inmate from the FBI agents who were working with him and sent two people to confront the lead investigator at her home.

❝ Baca’s role in crafting and approving efforts to stymie an investigation put him in a legal box. But that’s akin to catching Al Capone for cheating on his taxes, considering the years of detailed reports on the culture of extreme and routine violence deputies used to maintain their authority within Baca’s jails.

❝ Baca, now 74, had initially sought to avoid trial entirely, copping a plea on lesser charges in exchange for a six-month sentence. A judge decided that the sentence was too light and refused to approve the deal.

Which is why continued vigilance over judges, how they are elected and/or appointed is critical. One of the last defenses against corruption and crime in a nation that often rewards criminal behavior with elective office. Worshipping the strong man syndrome.

Baca now faces a maximum of 20 years in prison.

❝ On Sunday Donald Trump took to Twitter in what has become a regular SNL-bashing session.

It was supposed to be business as usual, but musician and civil rights activist Danielle Muscato had enough.

❝ On Sunday, she brought the fire in a string of coherent, scathing tweets.

It goes on from there and thoughtful people – by the thousands – are sharing her feelings, her critique.

❝ A petition signed by more than 14,000 Saudi women calling for an end to the country’s male guardianship system is being handed to the government.

Women must have the consent of a male guardian to travel abroad, and often need permission to work or study…

Activist Aziza Al-Yousef told the BBC she felt “very proud” of the campaign, but now needed a response.

❝ In the deeply conservative Islamic kingdom, a woman must have permission from her father, brother or other male relative – in the case of a widow, sometimes her son – to obtain a passport, marry or leave the country.

Many workplaces and universities also demand a guardian’s consent for female employees and students, although it is not legally required…

Renting a flat, undergoing hospital treatment or filing a legal claim often also require a male guardian’s permission, and there is very little recourse for women whose guardians abuse them or severely limit their freedom.

❝ In July, an Arabic Twitter hashtag which translates as “Saudi women want to abolish the guardianship system” went viral after a Human Rights Watch report was published on the issue. Saudi women tweeted comments, videos and artwork calling for change. Bracelets saying “I Am My Own Guardian” appeared.

❝ The women counted on the petition all gave their full names, though more signed anonymously. Hundreds of women – one estimate suggests as many as 2,500 – bombarded the Saudi King’s office over the weekend with telegrams containing personal messages backing the campaign.

Human Rights Watch researcher Kristine Beckerle, who worked on the report, described the response as “incredible and unprecedented”.

❝ Ms Yousef, who was stopped by police in 2013 for breaking the country’s ban on women driving, said she did not expect any negative consequences from the petition: “I’m not worried, I’m not doing anything wrong,” she said.

She and another activist took the petition to the Royal Court in person on Monday, but were advised to send it by mail…

“In every aspect, the important issue is to treat a woman as a full citizen,” she said.

Might be nice if some of our prominent citizens get on board this Freedom Train. 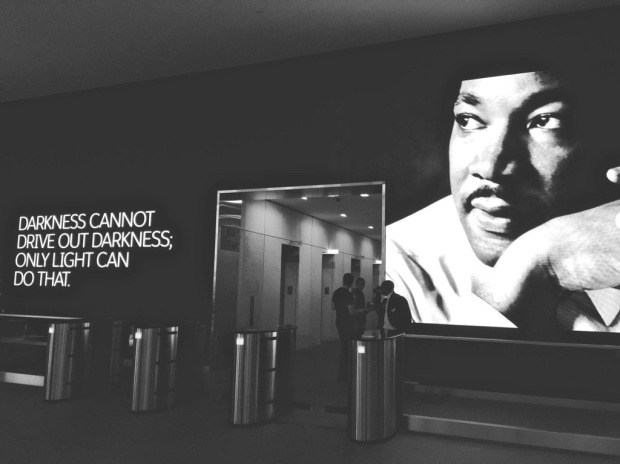 Walk into the Headquarters offices of salesforce.com and this is the video wall that greets you, this week. Kudos to the creative staff – and to Marc Beniof for having his head on straight in this increasingly distorted land we live in.